This is the second of a series of articles featuring animals in art. As a person who loves and cares about animals and an on-line activist for the cause of animal rights I often paint animals or include animals in some way in my art work. So I thought it might be interesting to showcase the work of other artists both the famous and not so famous who have chosen animals as subjects or have prominently included animals in their art. These articles will also include an How To section where you can find links to art instruction information concerning the featured animal . Also an How To Help section with information concerning how you can help whichever animals is the subject of the article.


This entry concerns donkey's in art, it highlights donkeys as they feature in works of art down through the ages to the present day. The How To Section includes an instruction video how to paint a donkey in pastel and the How to Help section has information about, including ways you can help, The Donkey Sanctuary  -  an international animal welfare charity that aims to protect donkeys and mules and promote their welfare worldwide. You can also help Donkeys in the Holy Land (Israel and Palestine )by clicking the link included in the video information.


The examples of art below do not appear in a chronological order as such is not possible or really important as the article is intended to show examples of donkeys and how they feature in a variety of different art forms rather than as a historical account.


A bit of background into the donkey
Sadly Donkeys are a much maligned creature, the butt of jokes and probably the most exploited beast of burden.
Find out more about Donkeys:
"The donkey or ass, Equus africanus asinus, is a domesticated member of the horse family, Equidae. The wild ancestor of the donkey is the African wild ass, E. africanus. The donkey has been used as a working animal for at least 5000 years. There are more than 40 million donkeys in the world, mostly in underdeveloped countries, where they are used principally as draught or pack animals. Working donkeys are often associated with those living at or below subsistence levels. Small numbers of donkeys are kept for breeding or as pets in developed countries."
http://en.wikipedia.org/wiki/Donkey

The first known Donkeys in art
​

Remains of domestic donkeys dating to the fourth millennium BC have been found in Ma'adi in Lower Egypt, and it is believed that the domestication of the donkey was accomplished long after the domestication of cattle, sheep and goats in the seventh and eighth millennia BC. Donkeys are featured in the art of many ancient cultures including the Egyptians.

Below is a fine Byzantine Mosaic of the 5th century -  floor mosaic scene: Child and donkey, fragment *2 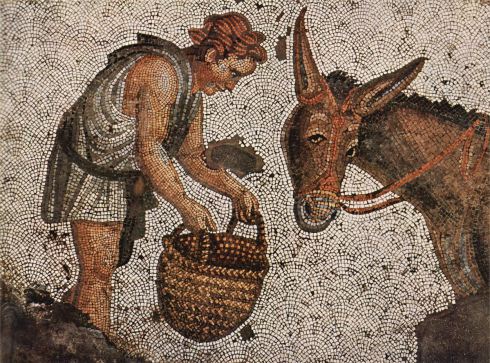 Christian Religious paintings abound featuring Donkeys such as the flight into Egypt a much painted subject. 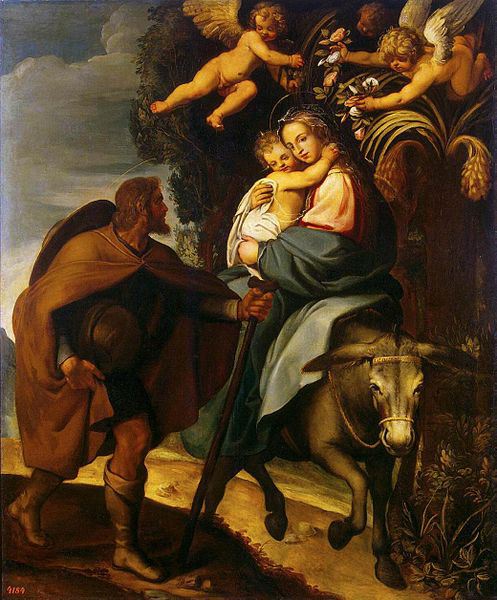 Flight into Egypt was painted in oil on canvas between 1600 to 1603, it is presently located in the Hermitage Museum in St Petersburg. Bartolomé Carducho (1560 – 14 November 1608) was an Italian Painter. He was born in Florence, where he studied architecture and sculpture under Bartolomeo Ammanati, and painting under Federico Zuccari. 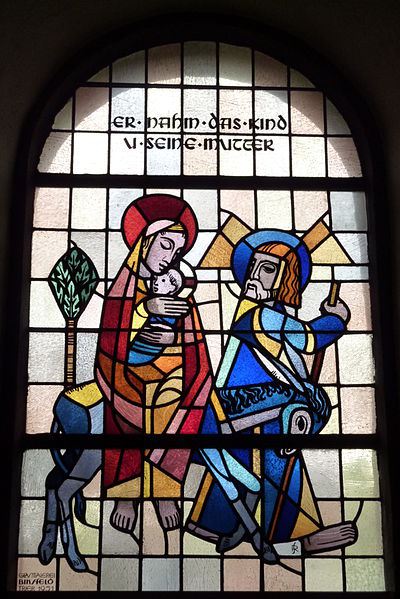 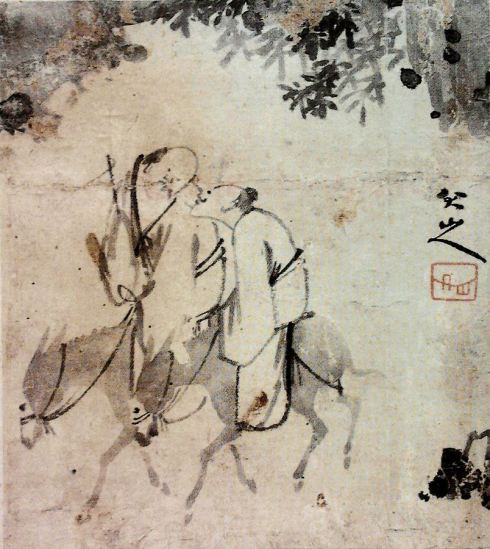 Painted in ink and watercolour on silk by Bada Shanren a chinese painter and calligrapher during the 17th century. Of noble linage he was a leading painter of the time and began painting and writing poetry right from early childhood. Read more about Bada_Shanrenhttp://en.wikipedia.org/wiki/Bada_Shanren

​
Donkeys in the stable by John Constable Painted in Oil on canvas.6* 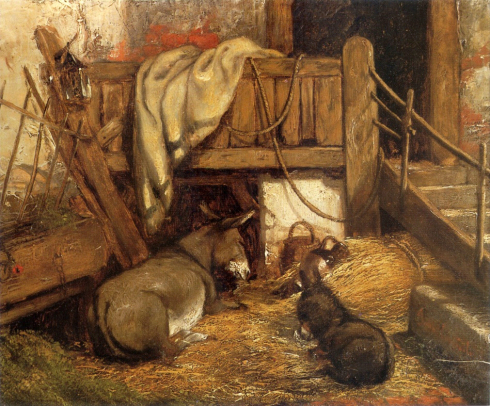 The painting above is located in The Museum of John Paul II collection in Warsaw. Mainly a self taught artist  John Constable (11 June 1776 – 31 March 1837) was an English Romantic painter most famous for his landscapes, which are mostly of the Suffolk countryside.
​Read More about John Constable: http://en.wikipedia.org/wiki/John_Constable
​

Two Donkeys Isaac Israels  1897 - 1901.  7* This work of art is painted in oil on cardboard and now located in Rijksmuseum Amsterdam, Amsterdam. Isaac Lazarus Israëls  (February 1865 – 7 October 1934) was a Dutch painter associated with the Amsterdam Impressionism movement. He often spent his summers with his father in the Dutch seaside resort of Scheveningen near The Hague where he painted many scenes such as this one of two donkeys.  Scheveningen’s donkeys were not just entertainment for seaside visitors; Israels made grateful use of them in his paintings. He portrayed them a few times, either with children riding or a boy leading, or as here, waiting for the next ride. 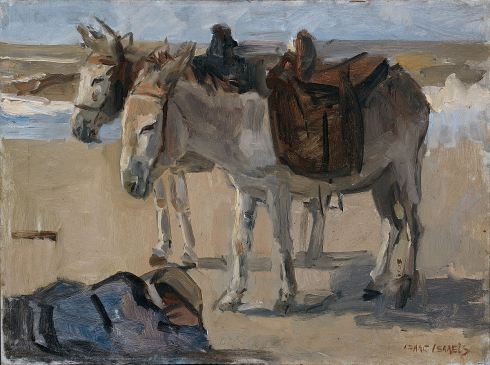 You can view the above painting in detail and see more of Isaac Israels work here:
https://www.rijksmuseum.nl/en/collection/SK-A-3595 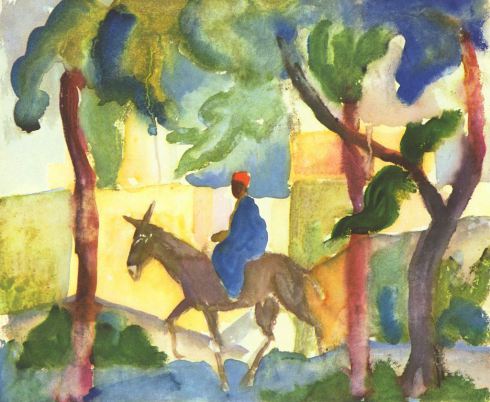 Painted in watercolour "August Macke (3 January 1887 – 26 September 1914) was one of the leading members of the German Expressionist group Der Blaue Reiter (The Blue Rider). He lived during a particularly innovative time for German art: he saw the development of the main German Expressionist movements as well as the arrival of the successive avant-garde movements which were forming in the rest of Europe. Like a true artist of his time, Macke knew how to integrate into his painting the elements of the avant-garde which most interested him." Read about August Macke: http://en.wikipedia.org/wiki/August_Macke 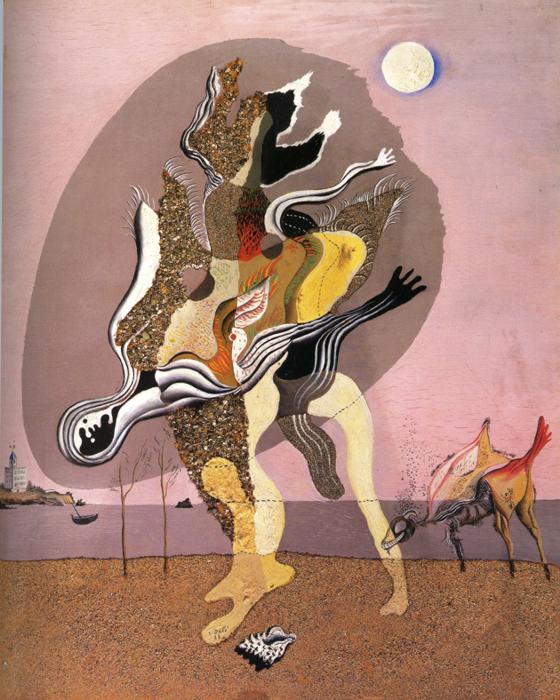 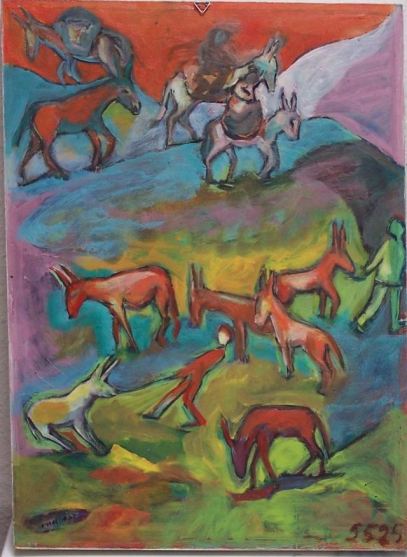 Margret Hofheinz-Döring (May 20, 1910, in Mainz – June 18, 1994, in Bad Boll) was a German painter and graphic artist. She created about 9,000 paintings, images and portraits, presented in more than 100 exhibitions. Read more about Margret Hofheinz-Döring:http://en.wikipedia.org/wiki/Margret_Hofheinz-D%C3%B6ring


For something a little different
Art in Egypt: Where to Find Cairo's Donkey Installations Photos of Cairo's most recent contemporary art project, a collection of fiberglass donkeys situated at art galleries around the city.
Read more and view photographs http://www.cntraveler.com/stories/2013-05-15/photos-2013-caravan-festival-arts-donkeys-cairo-egypt


The above is a mere drop in the ocean there are just so many depictions of donkeys in paintings let alone sculpture or featured on pottery . When I started researching for this artilce I did not expect to find so many works of art featuring donkeys . Of course the inclusion of Donkeys in religious art add greatly to this number as of course this animal was the main means of transport for many people. Nonetheless the number of artists choosing the humble donkey as the main subject of the painting is astonishing.
​

I have included a number of links below were if you are really interested you can view numerous paintings featuring donkeys.

"Safe Haven for Donkeys in the Holy Land, set up in 2000 by Lucy Fensom, reaches out to working and abandoned donkeys in Israel and the Palestinian Territories through its donkey sanctuary and free veterinary clinics for hundreds of working donkeys, mules and horses every month. Please visit their website at http://www.safehaven4donkeys.org for more information on how you can support them. This portrait was done using Rembrandt soft pastels and Derwent pastel pencils on Fisher 400 art paper."
​
How to help Donkeys
​
In addition to Safe Haven For Donkeys included above please visit the Donkey Sanctuary's website:
http://www.thedonkeysanctuary.org.uk/
​
"The Donkey Sanctuary was founded in 1969 by Dr Elisabeth Svendsen, MBE. She dedicated her life to champion donkeys, and it is through her devotion that the Sanctuary grew to be the international charity it is today.
Extract from the Donkey Sanctuary's About Page read more: http://www.thedonkeysanctuary.org.uk/about-us
​
Important:
Please note the information in this blog is included for interest only, it is not suitable for serious study as precise accuracy cannot be guaranteed. Please keep in mind that information included on this blog has been researched to the best of my ability and any misinformation is quite by accident but is of course possible.