We need another and a wiser and perhaps a more mystical concept of animals. Remote from universal nature, and living by complicated artifice, man in civilization surveys the creature through the glass of his knowledge and sees thereby a feather magnified and the whole image in distortion. We patronize them for their incompleteness, for their tragic fate of having taken form so far below ourselves. And therein we err, and greatly err. For the animal shall not be measured by man. In a world older and more complete than ours they move finished and complete, gifted with extensions of the senses we have lost or never attained, living by voices we shall never hear. They are not brethren, they are not underlings; they are other nations, caught with ourselves in the net of life and time, fellow prisoners of the splendour and travail of the earth.
Henry Beston

The above to my mind is among the most profound of quotations concerning our relationship with other animals and their place in the world. 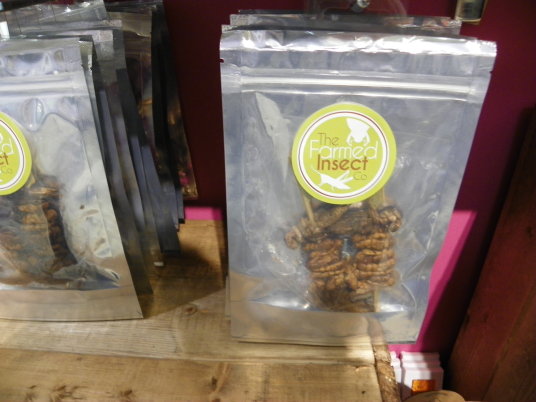 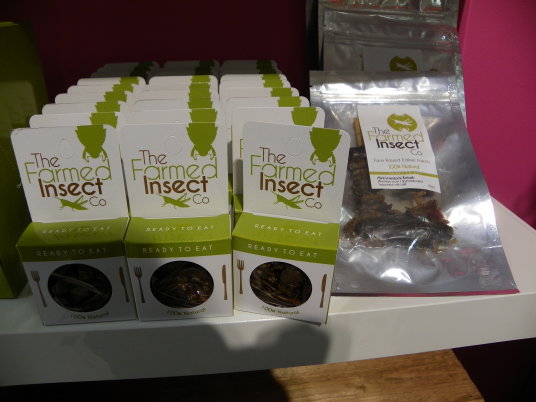 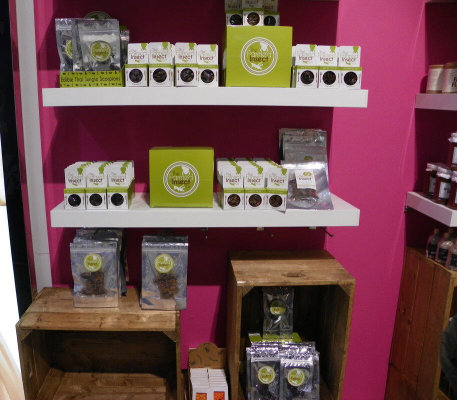 The photographs above show a number of edible insects available in Fenwick's store here in the UK.

The following photographs show dead arachnids, in this case scorpions encased  in ...well who know what. 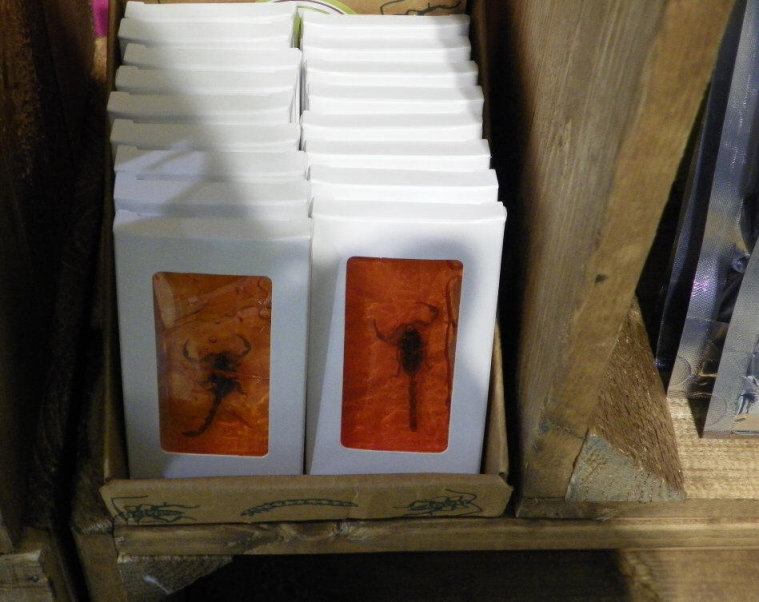 Few if anyone takes any notice, even vegetarians or maybe even vegans may pass by without a second thought. How many websites, books, articles or comments focus on insects and their right to life. Insects it appears are of little consequence to most people. Their lives it seems are expendable, they can be destroyed en masse, eaten as a novelty in the case of insects at Fenwick's and made into ornaments if indeed this is the purpose of the above encasements of scorpions

In chapter nine of her book Peace to All Beings: Veggie Soup for the Chicken's Soul entitled prayers for specific Animal Nations Judy McCoy includes insects, arachnids and arthropods under the heading Insects and other Tiny Nations a clear reference to the above quotation.

Of all the creatures with whom we share this world insects, arachnids and other tiny beings are overlooked when it comes to caring about how they are treated. Rather like the "fish aren't animals" ignorance, many people do not consider these tiny beings as animals. With a nervous system, a brain and mobility it is obvious on reflection that they are indeed animals. If in doubt see definition of an animal:  http://www.britannica.com/EBchecked/topic/25501/animal This ignorance surprises me as such classifications form the basis of any biology course which most people at the very least have taken during their school days 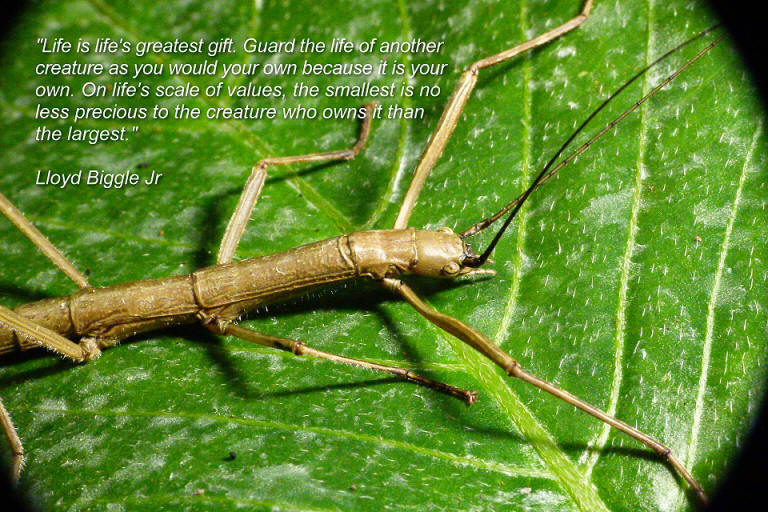 The Ethic of Reverence for Life*

The fundamental principle of morality which we seek as a necessity for thought is not, however, a matter only of arranging and deepening current views of good and evil, but also of expanding and extending these. A man is really ethical only when he obeys the constraint laid on him to help all life which he is able to succour, and when he goes out of his way to avoid injuring anything living. He does not ask how far this or that life deserves sympathy as valuable in itself, nor how far it is capable of feeling. To him life as such is sacred. He shatters no ice crystal that sparkles in the sun, tears no leaf from its tree, breaks off no flower, and is careful not to crush any insect as he walks. If he works by lamplight on a summer evening, he prefers to keep the window shut and to breathe stifling air, rather than to see insect after insect fall on his table with singed and sinking wings.

If he goes out into the street after a rainstorm and sees a worm which has strayed there, he reflects that it will certainly dry up in the sunshine, if it does not quickly regain the damp soil into which it can creep, and so he helps it back from the deadly paving stones into the lush grass. Should he pass by an insect which has fallen into a pool, he spares the time to reach it a leaf or stalk on which it may clamber and save itself.

He is not afraid of being laughed at as sentimental. It is indeed the fate of every truth to be an object of ridicule when it is first acclaimed. It was once considered foolish to suppose that coloured men were really human beings and ought to be treated as such. What was once foolishness has now become a recognized truth. Today it is considered as exaggeration to proclaim constant respect for every form of life as being the serious demand of a rational ethic. But the time is coming when people will be amazed that the human race was so long before it recognized thoughtless injury to life as incompatible with real ethics. Ethics is in its unqualified form extended responsibility with regard to everything that has life.

Extractions for the Ethic of a Reverence for life by Albert Schweitzer.

The welfare and rights of insects may not be as clear-cut an issue as they are perhaps for most of the animals that attract our sympathy and compassion and for whom we take up the cause, such as elephants, lions and other endangered species. How we treat insects may not be as clearly defined in our mind compared to how we treat our domestic animals such as our cat or dog or how we feel about the cruelty to farm animals and the appropriate action to take. Few people go out of their way to speak out for these tiny creatures let alone campaign for their protection.

My philosophy on the matter is to avoid harming any creature regardless of size, species or popularity. There are times when it is not possible to protect the lives of insects, head lice are after all insects and most people other than perhaps a Jain monk or nun would not rid themselves of head lice. I endeavour to live much as Albert Schweitzer in the above extract. I save insects and other tiny creatures whenever I can from needless death. I would rescue a worm marooned on the pavement and capture insects inside a glass as they struggle for freedom against the glass of my windows in order to free them outside. I would remove a spider from the bath rather than turn on the tap. I would not poison insects or other tiny creatures and certainly would not consume them. If my adopted rabbit got lice I would have no choice but to kill them, but I would do so with some thoughtfulness that these are living beings, but I would have no choice.  I recognise that these tiny animals have a right to their lives and as much as is humanly possible I try to respect that life.

Consider the following dilemma for a vegan facing the invasion of her bedroom by hoards of flying ants:

A Vegan Angel... of Death

I moved next into the bedroom and turned on the light: And there they were: Hundreds, thousands of swarming winged ants, blanketing the large window frame and the wall next to my bed. Where I sleep. On the floor and baseboard, hordes of their wingless minions, worker ants who can’t reproduce, scuttled back and forth, so dense that I could barely see the wooden slats beneath them.

Heart pounding, I ran out of the room and slammed the door shut. A primal fear of attack and violation turned to anger. I am vegan – I’m an ally of living creatures, so how dare they invade my home? It turns out that the compassion (and rationality) I am so proud of has limits, though I don’t know if the line is drawn at the borders of my turf or by species. Whatever the reason, these ants inside my castle made my hair stand on end, and I wanted every one of them dead and gone.

Many years ago before I became either vegetarian or vegan a similar thing happened to me regarding ants though maybe not as bad. One day about the time when the queen ants are about to fly a column of ants, mostly these pregnant females, where marching up my kitchen wall. In a fit of panic I got my husband to spray them with fly killer.  I felt guilty even though I did not have the ethic of... how shall I put it... respect for life as I do today, but nonetheless I felt awful. I admit that I am phobic regarding insects and it was fear more than anything else that caused me to take this course of action.  Since than if this problem arises, and it did though to a far lesser extent, I vacuum the tiny creatures and release them outside. But still today I feel guilty that I killed these creatures who must have suffered a painful death. I don't agree with the comments in the above article that insects do not feel pain as there is evidence that they most certainly do.

And regardless of whether or not they feel pain, insects and other tiny creatures have a right to their lives.

Do Vegans Kill Bugs
There’s a popular vegan question sandwiched in between all of the protein inquiries and “fish aren’t animals” misstatements you hear regularly: “Do vegans kill bugs?”
Read More:
http://www.yourdailyvegan.com/2014/05/27/do-vegans-kill-bugs/

I am not an animal expert of any kind just your average person who loves animals, all animals, and feels deeply about the plight of many of our fellow creatures. Neither am I a writer, or any other expert. Therefore please keep in mind that the information included in this website has been researched to the best of my ability and any misinformation is quite by accident but of course possible.


More information about Copyright, accreditations and other matters, please read

Rantings From a Virtual Soapbox
A blog in support of animal and human rights and the environment
http://rantingsfromavirtualsoapbox.wordpress.com/