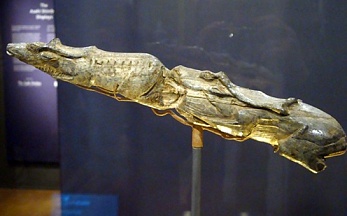 This page is part of a section concerning Reindeer.

Important please note: The following section of articles concerning reindeer is for interest only. I do not condone the domestication of reindeer under any circumstances, particularly the slaughter of reindeer for meat. References to reindeer husbandry, the traditional reindeer herding and their use as meat, clothing transport and similar issues are of course included here as part of the information concerning reindeer. I and many others of a similar persuasion would like to see the exploitation of reindeer for meat, skins, entertainment and as other resources and uses consigned to history forever with a future where reindeer and other domesticated animals are left to live out the course of their lives unmolested. In short this website supports the abolition of the exploitation of all animals in all circumstances. Please see: Animal Rights
​
Click the links below to access pages on the following topics:

Reindeer:  Domestication in Recent Times and the issue of Animal Rights.

From cave art to clip art reindeer have been the subjects of visual art for thousands of years. A selection of art with reindeer as its subject appear below.

Reindeer Swimming is the name given to a beautiful carving created from a mammoths' tusk of two reindeer to look as though they are swimming. Reindeer swimming was carved in France and is about 13000 years old.

The carving, which is eight inches long and shows a female reindeer closely followed by a larger male, was found in two pieces in 1866 by a French engineer, Peccadeau de l’Isle, but it was not until the early part of the twentieth century that it was realised that the two pieces fitted together to form a single sculpture of two reindeer swimming nose-to-tail. The carving is now the property of the British museum.

This finding was remarkable for a number of reasons. The sophistication and intricacy of the carving and the fact that the carving illustrates reindeer, which no longer of course inhabit France. In addition the ancient find resulted in a re-evaluation of  human life during the ice age. The sculpture which was discovered even before cave paintings were found showed that humans existed with mammoths, of which fact there had been some doubt, at a time when Europe had a climate similar to that in Siberia today. The sculpture appears to have no practical purpose and may simply be a piece of art created by an artist who was among the first humans to convey his world through the medium of art, however it may have some religious function, it is the oldest example of art in the British Museum. More information may be found by clicking the links below.

The above link will take you to a BBC Radio programme: A History of the World in 100 Objects. In this programme the Director of the British Museum, Neil MacGregor tells the story of the Swimming Reindeer and its place in the history of art and religion with contributions from the Archbishop of Canterbury, Dr Rowan Williams, and archaelogist Professor Steven Mithen. 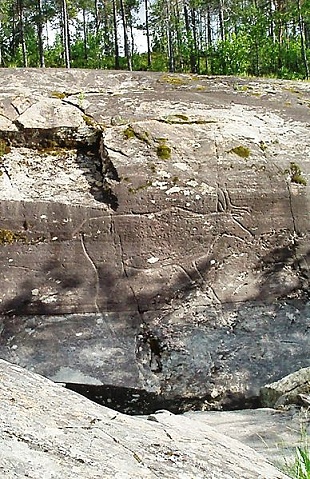 Reindeer featured in Rock cravings: Bøla
Font-de-Gaume Cave Paintings
​
Many reindeer remains are associated with ancient cultures who depended upon reindeer for food and clothing and many artistic renditions of these animals were depicted on the walls of caves and as subjects of rock drawings. One such example of cave art featuring reindeer are the polychromatic paintings on the walls of Font-de-Gaume near Les Eyzies-de-Tayac-Sireuil in the Dordogne départment of south-west France,  a cave from the Magdalénien period, about 14,000 BC, which was discovered in 1901 by Denis Peyrony. It is one of the most important of about a dozen major paleolithic sites in the region. The depictions of the animals were first engraved and then painted inside the engraving. Among the paintings of bison, mammoth, deer, horses, cattle, goats, a wolf, a bear, and two rhinoceroses there are seventeen paintings of reindeer and other species of deer.
​
One of the paintings of the famous scene of a male reindeer licking a kneeling female reindeer with a line of other reindeer behind can be seen by visiting the following website:donsmaps.com/fontdegaume.html

An example of rock art from the Stone and Bronze ages featuring reindeer can be found in central Norway, this region contains approximately 300 rock craving and rock painting sites. The Stone age rock art depicts reindeer along with mammals such as elk, bear and red deer, whales and porpoises.

It has been suggested that these are clan totems and are depictions of spiritual animals seen in a trance.

Of particular note concerning the depiction of reindeer is the Stone Age site of Bøla discovered in 1895 close to a waterfall about 30 kilometres from Steinkjer, Nord-Trøndelag, The first craving to be discovered here was that of an almost life size reindeer. The cravings are thought to be 5,500 years old

It is a classic example of rock carving in Scandinavia

Grazing Reindeer: A Reindeer bull Carved in a Piece of Antler

This drawing shows a  Reindeer grazing carved into a portion of the beam of a reindeer antler from  Kesslerloch, a cave in Thaygen, Switzerland which was occupied during a cold phase of the final glaciation, and which was discovered by Conrad Merk who came upon the cave whilst on a botanical expedition in 1873. The Kesslerloch cave is one of the most important sites of the late Ice Age in Europe and provides evidence of settlements from the Upper Palaeolithic Age during the Magdalenian culture, also referred to as the Age of the Reindeer. During this time period reindeer were found as far south as Nevada and Tennessee in North America and Spain in Europe.

The graphic below comes from the book: Excavations at the Kesslerloch near Thayngen, Switzerland a cave of the reindeer period By Conrad Merk 1876Translated by John Edward Lee.

The book contains the account of excavations at the Kesslerloch Cave. At least 90 percent, of the bones found were those of Reindeer along with mammoth, horses, red deer, red fox  Ibex, Chamois and other animals. It is considered that the prehistoric dwellers of the cave of Kesslerloch attained a high degree of excellence in their engravings of animals and the example of the life-like rendition of a reindeer below supports this opinion.

Other excavations at Kesslerloch comprised bone harpoons and spearthrowers, and a stone tool kit of borers.

The links below will take you to an on-line copy of the book, where you will find other engravings of animals and other finds, and also a review:

openlibrary.org/books/Excavations_at_the_Kesslerloch_near_Thayngen_Switzerland
​
To see the graphic as it appears in the above mentioned book:
archive.org/stream/excavationsatkes00merkiala#page/n101/mode/2up 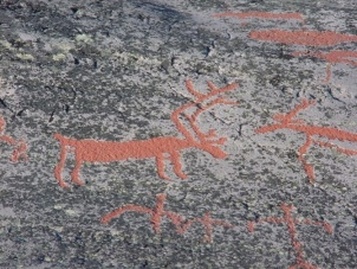 Discovered in 1972 the rock carvings, in 300 locations around Alta In the county of Finnmark in northern Norway, consist of over 5,000 individual cravings, or more accurately Petroglyphs, dating from 4200 BC to 500BC. Other than the carvings themselves not much is known about the people who created them.  The subjects of the depictions carved into the rock suggest these people herded reindeer, and practiced a Shamanic religion that included the veneration of animals, particularly bears. A large variety animals are subjects of many of the carvings, however Reindeer predominated. 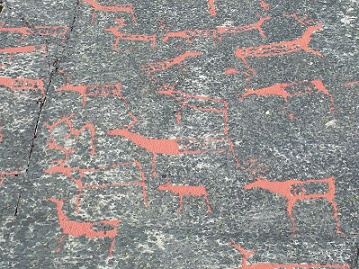 Pregnant animals including reindeer are often depicted with a young one visible inside of his or her mother. You can view an interesting photo of a rock carving of pregnant reindeer by clicking the link below


There are some interesting Alta carvings featuring  reindeer, two of which appear above. 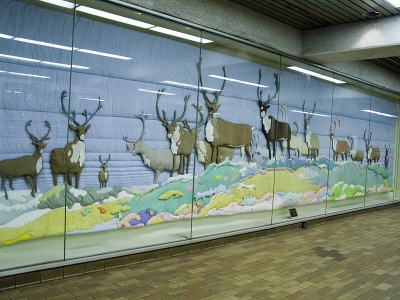 Created in 1978 Barren Ground Caribou, is an unusual creation composed of fabric in the form of appliquéd quilting by Joyce Wieland experimental filmmaker and artist.It is exhibited at Spadina subway station in Toronto

It features Barren ground Caribou in a tundra landscape.

To view the complete work of art click the link below: 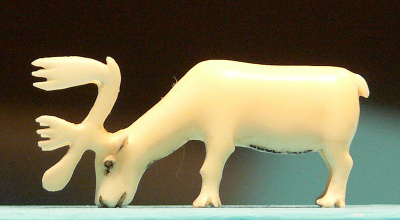 Alaska caribou grazing. Sculpture is c 1920 and exhibited in the Linden-Museum Stuttgart. 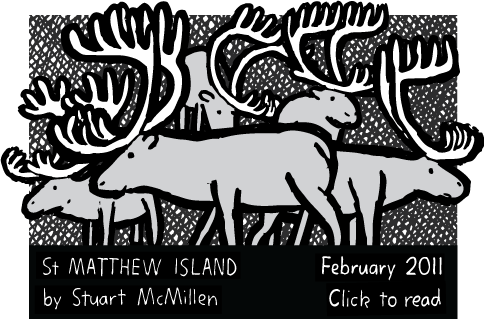 Modern Reindeer art with a Message

What happens when you introduce 29 reindeer to an isolated island of untouched natural resources?

The comic strip is by graphic artist Stuart McMillen and tells what happened to Reindeer who were introduced to St Matthew Island in 1944. The comparison is made to the likely consequences of our unsustainable living and ever increasing population

The artist apparently was inspired by a verse in Hindu scripture “We have drunk of the soma; we have become immortal, we have seen the light; we have found the Gods.” The main ingredient to this enlightening potion has it seems been lost. In 1968 American banker and amateur mycologist Gordon R. Wasson suggested that the red and white poisonous fly Amanita mushroom which reindeer eat and which could be ingested by drinking their urine may be the lost ingredient. With this concept in mind Höller created a huge dual sided exhibition in two halves of the Museum's huge hall where the reindeer and other animals are displayed on one side to represent the “normal world,” and the other side a scene from the psychedelic “realm of soma.”

Links to Photos of the exhibition:

Clip art, in the graphic arts, refers to pre-made images used as illustration. Clip art is generally composed exclusively of illustrations either created by hand or by computer software, although the later is more common nowadays

Original clip art at one time consisted of the practice of cutting actual images from pre-existing printed images and than used in other printing projects. Original clip art was used through a process called Paste up, a complicated and time consuming process of laying out and publication of pages that predates computers and desk top publishing. The images were literally cut by hand and pasted with the use of adhesives to a board scaled to the size of the finished work. After the addition of text and art created through phototypesetting, the finished, camera-ready pages are called mechanicals. Since the 1990s this process had been replaced by desktop publishing.

Desktop publishing makes the use of clip art available to everyone. After 1986, desktop publishing generated a widespread need for pre-made, electronic images as consumers began to produce newsletters and brochures using their own computers. Electronic clip art emerged to fill the need.

Below are are just a small sample of the vast proliferation of clip art featuring reindeer.
​
The above clip art originates from the following websites:

Important please note:I am not an animal expert of any kind just your average person who loves animals, all animals, and feels deeply about the plight of many of our fellow creatures. Neither am I a writer, or any other expert. Therefore please keep in mind that the information included in this website has been researched to the best of my ability and any misinformation is quite by accident but of course possible.